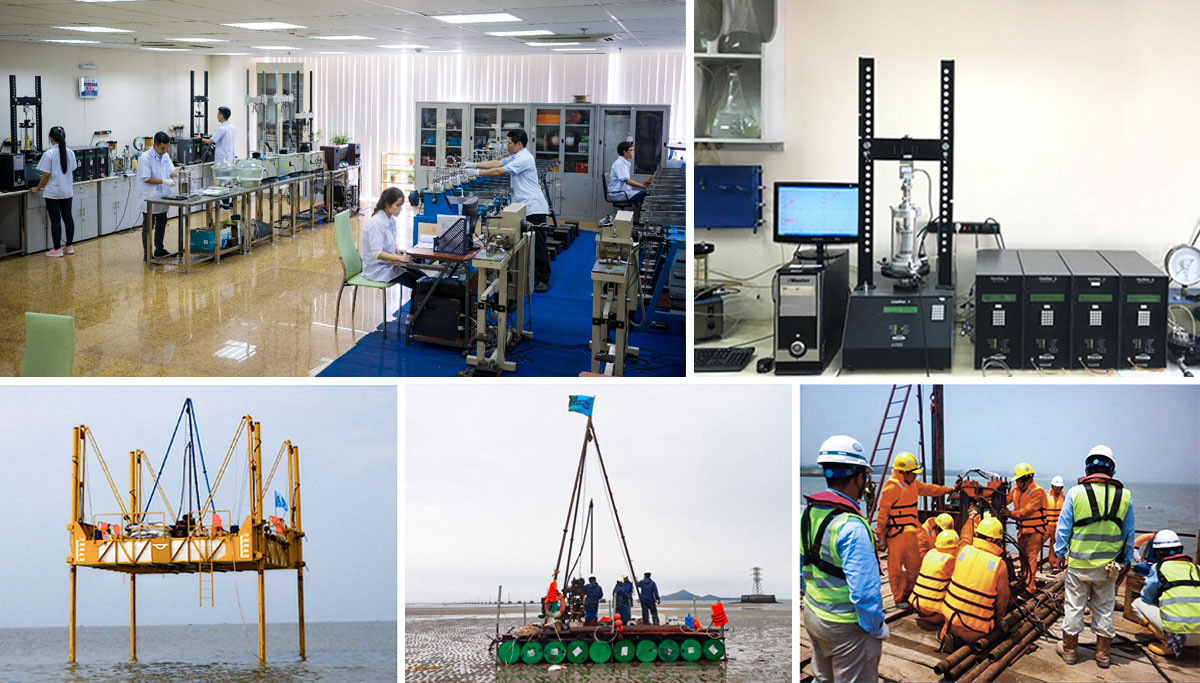 Company’s manpower includes the expert staffs trained at home and abroad, the highly skilled and creativeness technicans. Together with the modern equipments and the processing systems with automatically data recording, the advanced geotecnical processing softwares with the new updated version on the world.

The objective of drilling work is to collect soil sample for testing engineering design and construction. This is the most effective method to evaluate the soil stratum in the construction site. Soil samples are then taken to provide for the determination of soil characteristics in the laboratory. Nowadays, this method is very popular in construction in Vietnam and over the world as well. Having about 10 drilling rigs together with skilled human resources, PortcoastGeo always satisfies the Client’s demands about schedule and also as the harshness of weather condition.

The 20HP drilling rig capacity is enough to make a borehole to 100m depth into soil or rock. The hole is made by rotary method combined with circulatory solution to lift the drilling mud upward. Some in-situ tests are also performed inside the drilled borehole such as: Standard Penetration Test (SPT), Field Vane Shear Test (FVST), Pressuremeter (PMT) and other tests. Besides, the drilled borehole is also used to install geotechnical instrumentations.

The field vane shear test determines the undrained shear strength of clayey soils at site. This test is done in both casing and borehole. When the vane reaches the desired depth, push the vane rods downward direction about 3 times vane diameter from the borehole bottom then rotate the gauge to record moment value. The expected result is the undrained shear strength at the depth.

The field vane shear test is suitable for very soft to medium stiff clayey soils. The vane size is replaced for the proper material. 04 field vane machines doing well and a hydraulic Jack of 15 tons operated to push the casing to the required depth allow the test done quickly.

The Piezocone Penetration Test is a versatile equipment and provide fast in-situ results. Based on recorded data, the soil strata are determined faster than other equipments. Data recorded by sounding transfer from memo-cone to the dataloger on surface. The inclinometer sensor is attached in the memo-cone to control inclination during penetration.

Soil parameters are recorded such as: cone resistance (qc), sleeve friction (fs) …This equipment can also be performed pore water pressure dissipation test at the field – an important soil parameter in term of calculation the horizontal consolidation coefficient.

Having 04 memo-cones, 03 dataloger both C-Mon and PC-Mon and 4 hydraulic jacks from 10 to 20 tons, Portcoast-Geo is proud of being as a leading company in this kind of test and always meet Client’s demand.

The PDA uses signals from reusable sensors to collect data. It consist of 2 Accelerometers and 2 strain gages. When a hammer or weight strikes top of pile, the compressive stress wave travel down its shaft and reflect up. Soil resistance forces along the shaft and at the toe cause wave reflection and are felt at the top of the pile. The measured force and velocity near pile top thus provides necessary and sufficient information to estimate soil resistance and its distribution.

The Pile Driving analyzer technology applies dynamic measurements to solve pilling problems. Force and acceleration measurements taken near the top of a pile during impact provide the necessary information for determining:

PDA Testing is a quick, low cost and very reliable tool. You save time and money. You gain quality assurance.

Inclinometer system is used to monitor lateral movement of slope embankment during construction stage or slope protection. The inclinometer probe, datalog box and casing were manufactured by Geokon Co., (USA).

There are 02 types of conventional Piezometer: vibrating-wire piezometer and standpipe piezometer.

Observation well is used for monitoring ground water level in a soil layer of stratum. 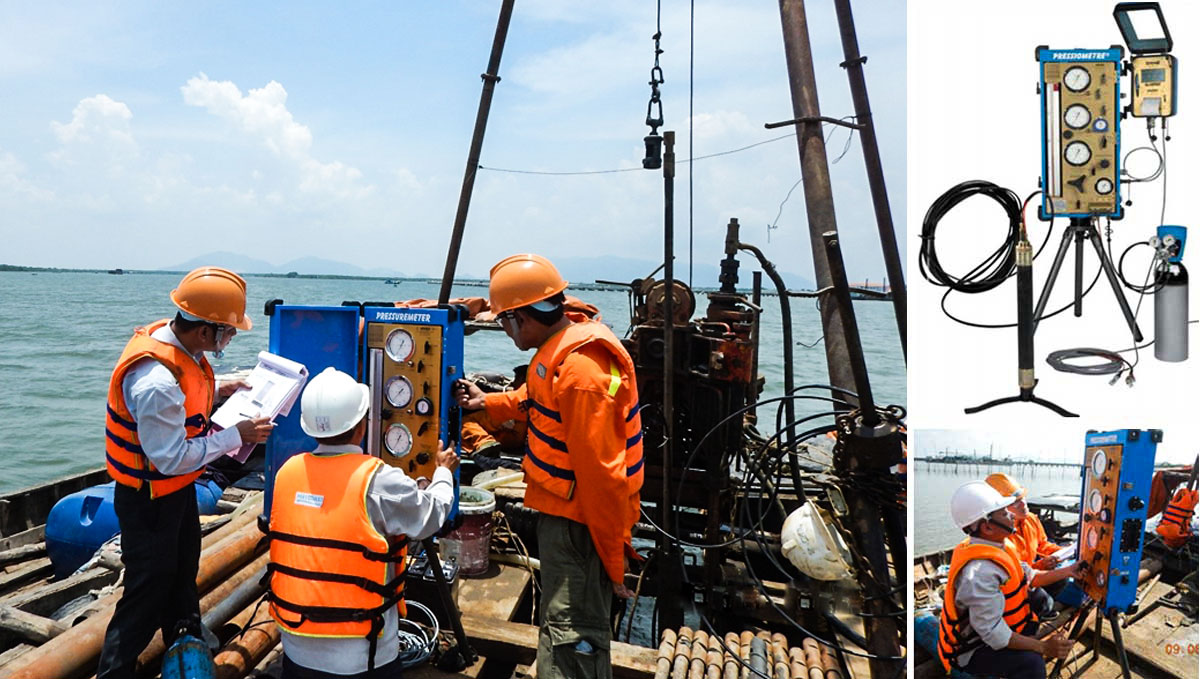 The Pressuremeter Test (PMT) provides a tress-strain response of the insitu soil. A deformation modulus called the pressuremeter modulus (Ep) and a limit pressure (PL) can be obtained from the stress-strain relationship for geotechnical analysis and foundation design.

The pressure within the measuring cell is held constant for approximately 60 seconds, and the increase in volume required maintaining the constant pressure is recorded. A load-deformation diagram is recorded for each test run.

The results are presented by a grain size distribution curve which is combined as the percentage of sample smaller than, by weight, versus the log of the particle diameter. The curve provides the parameters about effective diameter (D60 & D10) and coefficient of uniformity (Cu). Tests were performed in accordance with ASTM D422.

Atterberg limits test: Atterberg limit test aimed to determine liquid limit (LL) and plastic limit (PL) which are very important indices used for classification of cohesive soil. The testing equipments are manufactured by HUMBOLDT â€“ USA and procedures are according to ASTM, BS.

Laboratory is equiped a Oedometer (or one-dimension consolidometer) test system of 30 sets manufactured by HUMBOLTD (USA) which can be reached to maximum pressure of 64 kG/cm2. Displacement transducer MLT system including 30 channels connected to automatic data acquisition Datalogger supplied by M-System (Japan). During test, data will be controlled and updated by M-System software, continuously. Warning will be activated when strain gauge out of safety limitation.

CRCS test: The conventional oedometer test equipment is able to replace by LOADTRAC II integrating with ICON software, the system can complete a consolidation test within one day instead seven by conventional oedometer test. Process of loading and unloading shall be automatically controlled by ICON software. Fully automation of testing procedure aimed to reduce human error and enhance accuracy of testing, that is dependent on the data transmission and processing capacity of transducer reached to 22 bits. 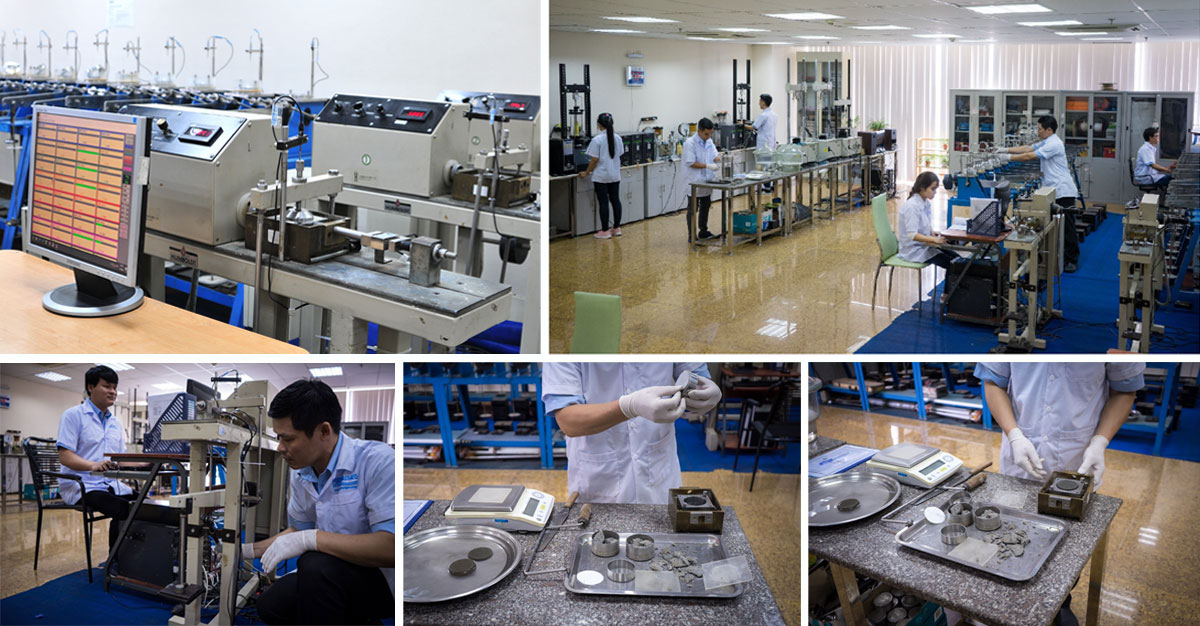 The Direct Shear test equipment manufactured by Humboldt using Loadcell and MLTs to monitor the shear force and MLTs are used to monitor both vertical and horizontal deformation. The data are automatically recorded and stored by Datalogger.

The test purposed to evaluate soil shear strength in condition of undrain and drain according to ASTM 3080.

The test equipment can apply maximum normal stress up to 32 kG/cm2, the dimensions of square shear box is appropriate for soil specimen of 2.5 inches in diameter and height of 1 inch. LoadCell with capacity of 1KN.

Strain gauge to measuring vertical and horizontal displacement with capacity of 0.6 inch. Shear rate ranging of 0.001 to 15mm/min.

Triaxial test equipment consists of flow pump system FlowTrac II and machine with multiple capability LoadTrac II manufactured by GeoComp-USA. The system will be connected to the computer network by network card, thereby tesing process will be fully automatical controlled by Triaxial professional programme. It included saturation stage, consolidation stage (Isotropic and K0 condition), and shearing with constant rate or any stress path. In report, the programme will automatically output the detail report for test. 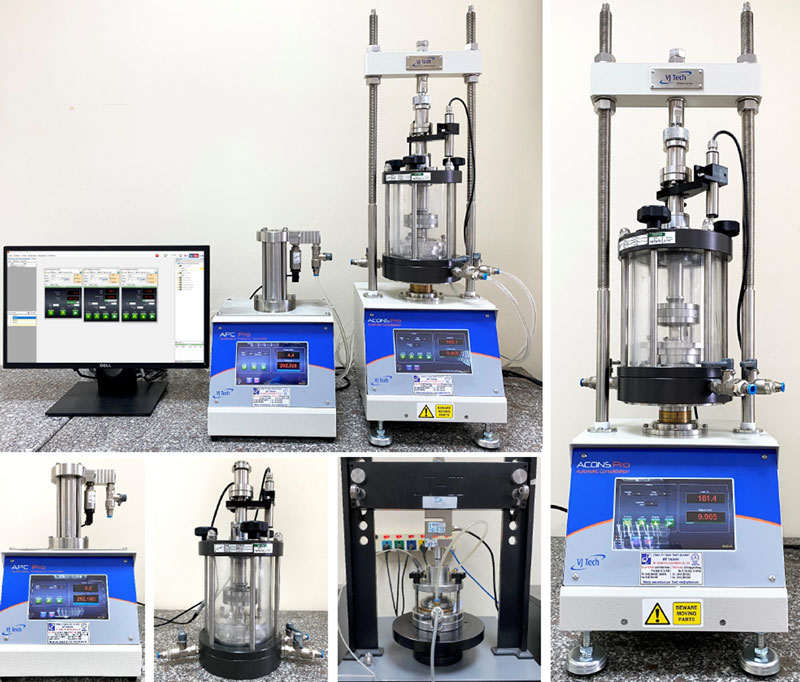 CRC test: The conventional oedometer test equipment is able to replace by LOADTRAC II integrating with ICON software, the system can complete a consolidation test within one day instead seven by conventional oedometer test. Process of loading and unloading shall be automatically controlled by ICON software. Fully automation of testing procedure aimed to reduce human error and enhance accuracy of testing, that is dependent on the data transmission and processing capacity of transducer reached to 22 bits. 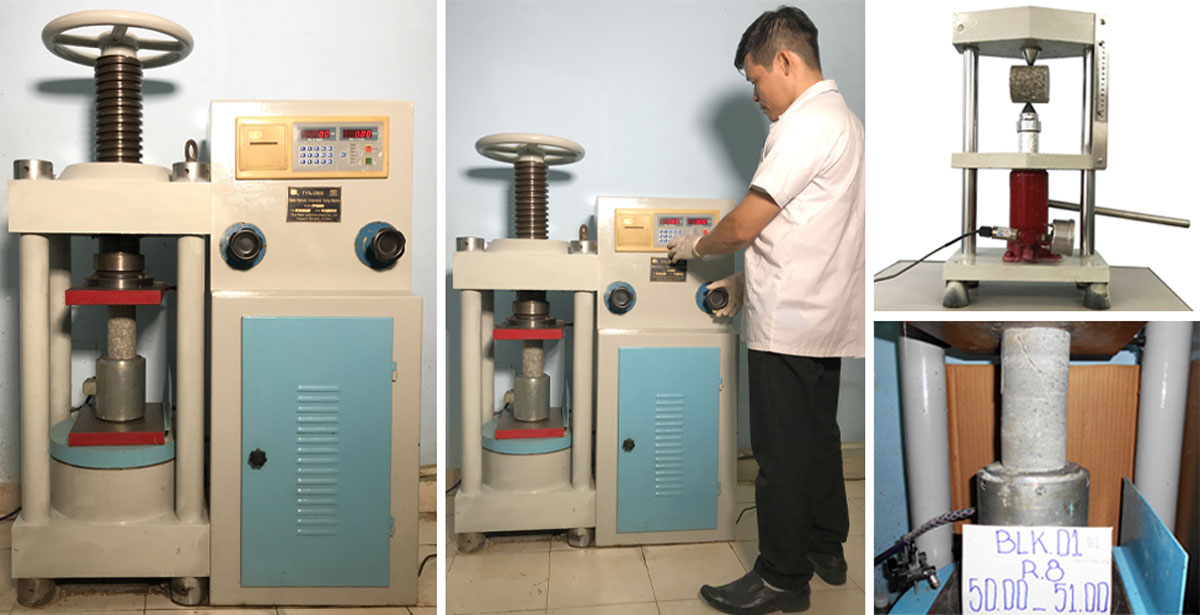 The uniaxial compression test is to measure uniaxial compression strength (qu), deformation modulus (Es50) of cylindrical rock specimen. The test conducted by hydraulic compressive machine TYA-2000 (China), applied load and defomation measured by Loadcell and displacement transducer which are recorded by Datalogger and stored to computer. ASTM D 2938 -95 is used to applying for this test.

Insert the test specimen in the bevel die inset after that place beveled die inset between two press platens. The data is measured by Loadcell and displacement transducer then stored by Datalogger.